My therapist says that I need to begin blogging again. Well we both agree that it is something that I should be doing, writing in general……… and yea I already know this.
*STUBBORN*

I have not been here in a while but things have been crazy busy in good ways more than anything. I enrolled back into school to finish my degree and am studying Sociology with a focus in human services and community development, and have 8 classes left to go between this coming spring and next fall. What a journey that has been, which began in August of 2006.

My ex? who knows? I stopped keeping tabs a long time ago.

Thinking back to when I last gave a shit was back when I met the man of my dreams and he still is to this day even though we are no longer officially together. What a whirlwind romance that was. And he truly was just the most amazing man to me ever in my life. I am still so in love with him and he is also with me, but unfortunately I think we met at the wrong time or maybe just did not have what it took to be in a relationship after having both been in abusive marriages without having worked enough on ourselves. We are still talking while we split off and go our separate ways in this journey called life, but maybe and hopefully just for now. The similarities in our relationship though… his mother and my grandfather both being in the same orphanage, his mom and my parents house address both being 2628, our backgrounds, our stories, or characteristics, the way we craved each others smell and taste and presence. The connection was out of this world. So many worldly stressors caused us to look at each other as the enemy instead of the situation at hand, and I am sure it is because we are both broken. At the end he told me that I had to let him go because he was not healthy for a relationship and he did not want to hurt me or my kids. Pretty hard to hate the guy. My heart hurts and I have cried a lot. I have never been treated so good by a man in my entire life. He listened to me and he heard me and we laughed and talked in jersey and stood naked in hotel windows and stayed in hotels with waterslides without our children because we were the children in that moment and it was magical, moment you never want to end. My heart breaks for him because of his daily struggle with Gulf War Syndrome and how that played a big role in our daily issues. I love this man so much and want nothing for him but the best, even if its not me, and maybe its just not me right now. and that’s ok because right now I need me.

So… that is where we are… soaked face and keyboard with tears and all.

My professor next term is letting me leave class 10 minutes early to get to Yoga on time because yes I am signing up for yoga. First step toward enlightenment is crystals and chakras and second step, I am learning and assuming, is meditation/yoga/trying to get control of my insane brain/etc. My best friend is also doing it, which will be amazing because I miss her and it will be good for her also! I am excited to sign up for yoga because I am investing in my mental health and overall health…

speaking of health guess who was diagnosed with 2 (so far) autoimmune diseases?
*ME*
Oh joy. Skip the doctors for a few years and then open that box again and all of a sudden we have answers after a lifetime of having zero. So I was diagnosed with a debilitating form of arthritis that is in my spine and attacks every single place where the muscles and ligaments connect to the bones….. so all over my entire fucking body. Its a real god damn treat if you can’t tell by my colorful expressiveness. New pains daily, bouncing all over the place, my right hip hurt so bad at one point we were talking about possible replacement and then boom, just started feeling better. Had issues with my shoulder for like a year, couldn’t even lift it a few times when it got too bad and that just went away out of now here also. My doctor said the pain jumping around is totally indicative of the disease Spondyloarthritis, which is what I was diagnosed with. *rolling my eyes to the back of my fucking head*.. I was also diagnosed with Sjogren’s Syndrome which has dried out my entire body and gives me fabulous nerve pain and sensations all over my body all of the time. Soooooo I am trying medications. I just began this new classification that could jump start me into the 3rd autoimmune disease which would be Multiple Sclerosis which both my mother and fathers sister have. So on top of health stuff and school it has been tough for sure but I am still making the deans list every single semester and very much so looking forward to winter break off between semesters.

Also, When starting the school things again we did find out that I am running out of financial aid and would not have enough to finish paying for the last 3 classes of my degree…….. I was going to have to borrow the money or get a personal loan….. luckily I came across two scholarships that worked out for me and I applied for them and won both of them and now have enough money to finish my degree and to pay for the gas to commute! YAY!

So despite recent heartbreak things are going good. one day at a time is all we can do, its all anybody can do. I also stopped eating red meat and pork a week and a half ago. Baby steps. I am also writing this blog as a way to procrastinate from making two power points for finals week– solely for therapeutic purposes…. balance =) 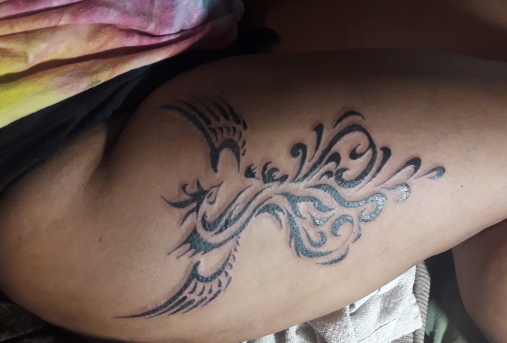 Well I suppose I should end there. This blog is hella long and my hands are cramped to hell from typing but I did get a good amount of procrastination done. Be sure to check back as I begin to peel away the layers of ME, bi-polar and all.

I came here to heal. This is my refuge! Facebook- DanteSkyy Collaborative IG & Twitter- DanteSkyyco View all posts by HealingHaven

This is a text widget, which allows you to add text or HTML to your sidebar. You can use them to display text, links, images, HTML, or a combination of these. Edit them in the Widget section of the Customizer.
%d bloggers like this: